Most people associate the word “diving” with recreational activities such as scuba or snorkeling. But diving is a profession as well. The work of underwater construction, inspection, salvage, and repair all require special skills and equipment. The people who perform these jobs are known as “commercial divers”.

Professional divers who harvest sea life such as abalone, urchins, or sponge are called “fishery divers” Their skills and equipment are specific to the requirements of underwater fishing, and for that reason a fishery diver is not the same as a commercial diver.

This exhibit is an introduction to just a few of the thousands of jobs performed by commercial divers and fishery divers in the South Bay, and was the inspiration of the late Torrance R. Parker, noted commercial diver and author of 20,000 Jobs Under the Sea.

The South Bay is a major population and business center. Development of the Port brought international trade to Los Angeles, and was a key factor in the economic development of Southern California. Building the Port’s infrastructure would not have been possible without commercial divers. 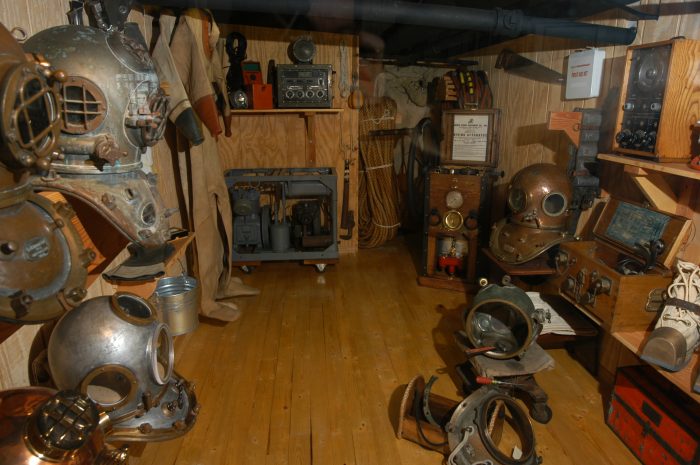 A typical diving crew consists of a diver, a tender, and an assistant tender. The diver is responsible for tasks such as pouring concrete, rigging heavy objects, welding, burning, pipe fitting, and ship repair and maintenance (known as “ship husbandry”). The tender and assistant tender are responsible for dressing the diver and maintaining life support equipment, tending air and communication lines, sending tools to the diver, and coordinating many of the topside activities in order to help complete the work below. Even with modern equipment, underwater work is often dangerous, and during emergencies it must be performed around the clock in any weather.

The suits, helmets, tools, and equipment in the exhibit have all been used to construct and maintain the underwater infrastructure of the South Bay. All of the items were used locally. Contrary to popular belief, standard diving gear (hard hat) is still used in diving operations involving heavy construction and sustained work periods below the surface.

Abalone is a type of snail that lives in rocky reefs as deep as 100 feet underwater. For thousands of years, Native Americans ate abalone and used the shells for currency, tools, and jewelry. 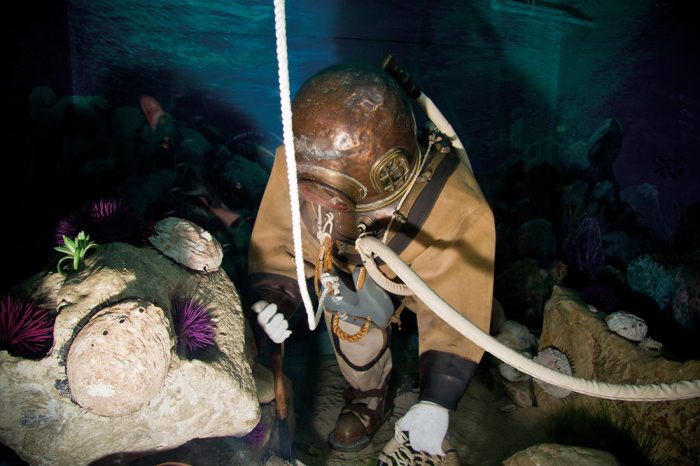 In 1901, 15 divers from Wakayama-ken prefecture in Western Japan established an abalone fishery a few miles northwest of San Pedro at White Point. Their first diving boats were large open rowboats with five-to-six men crews assisting. They used helmets of Japanese manufacture, and a hand pump to compress breathing air down to the diver. In addition to diving the White Point reefs, they also rowed to San Clemente Island, about 50 miles from White Point, seeking abalone.

This exhibit includes a representation of a Japanese abalone diver at work off White Point. After the diver uses his pry bar to remove the abalone from the rock, he stores it in a net sack. The diver’s assistant (called a tender) works in the boat above, taking care of the diver’s air hose and other needs. When the diver fills his sack, he will tie it to the rope lifeline so the tender can haul it up and send down an empty sack. A typical sack weighs 60 pounds.

California’s post-World War II population explosion created an even greater demand for the abalone, and millions of pounds were consumed annually. Many Caucasian divers entered the trade, modernizing the fishery with engine-driven boats equipped with motorized air compressors. Eventually, over-production, pollution, and the predatory sea otters decimated the abalone population to near extinction. In attempt to save the resource, the State of California banned the commercial harvesting of abalone in 1997.

This portion of the exhibit illustrates one typical commercial diving project in the Port of Los Angeles. In 1975, commercial divers constructed the sewer force main that transports sewage across the main channel to the Terminal Island Waste Treatment Plant. This project was a necessary response to an urgent need for improved waste treatment facilities. 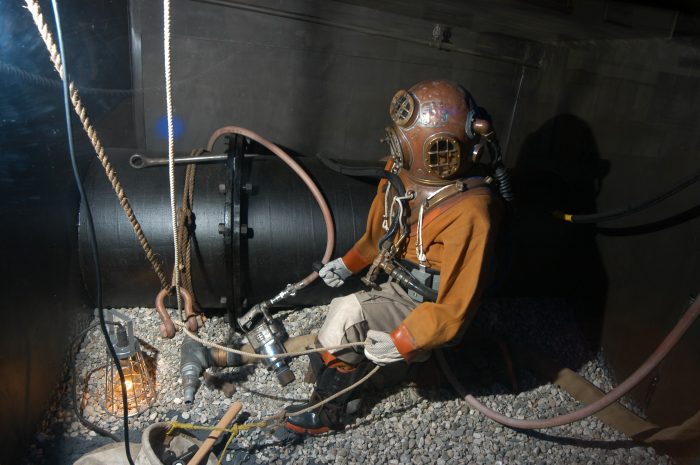 The diving work required the installation of 1,542 lineal feet of ductile iron joined pipe laid under the main channel of the harbor. Divers laid the pipe in a trench excavated to a depth of 65 feet, and surrounded it with rock backfill for support and protection. Diving work within the trench had to be accomplished by feel because of zero visibility caused by mud particles suspended in the water – a typical diving condition when working in harbors and muddy bottoms. A Los Angeles City survey crew worked with the inspector diver to help maintain the grade and alignment of the pipe.

Attached to the fire hose is a jetting nozzle that the diver will use to fill voids and compact the bedding gravel under the pipe. This style of jet is called a T-nozzle. The T-nozzle is fitted with short pipe nipples on each side of the T to prevent back pressure when it is turned on. Although several hundred pounds of water pressure will be forced through the nozzle, it will stay balanced because the streams of water coming out of it will be equal and opposed. This allows the diver to manipulate the nozzle more easily.

When all the studs are in place, the diver will use the pneumatic impact wrench to torque (twist) up all the bolting. The spud wrench is used to line up the gasket. Other hand tools used here are in the diver’s tool bag, or lying next to him. Because of the muddy water conditions, the real-life divers would not have been able to use the light. The diver is wearing one of the four-light helmets originally used in this project.